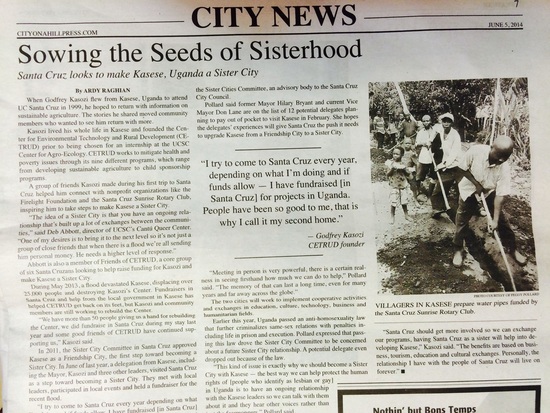 Sister Cities International conference  July 31-Aug 2,  San Jose.
Nancy Eidam, Enda Brennan, Jason McCluskey and I made some great connections with many American and international Sister Cities people,
Small business import/exporting!  One guest speaker from the Federal Trade Department says our government is encouraging more trade, and especially with African countries. They have info for small businesses on how to start that.
Another featured speaker was Cisco company Director of Urban Innovations, Gordon Feller.  I have just been able to connect him with Mayor Godfrey and Godfrey Kasozi. He has just given them an invitation to an elite, global Urban innovations conference next month to give input on which kinds of technology would be useful for their city. Many tech leaders will be there who are producing the technology but they need city leaders such as Godfrey Kasozi and Mayor Godfrey Kabbyanga, who can apply the technology around the world.
Mayor Godfrey is considering going, and Godfrey Kasozi would love to go but doesn't have funding for it. (Funding opportunity! cost would be $750 plus flight tickets Kasese to Detroit, tax deductible donation could be made through Sister Cities account.)

Unfortunately our new web-team hasn't been able to post all of our articles online, I apologize for any inconvenience. The article is in the latest issue of City on a Hill Press, we don't print during summer quarter so it should still be out in the city/campus, but here is the text of the article.

Sowing the Seeds of Sisterhood
When Godfrey Kasozi flew from Kasese, Uganda to attend UC Santa Cruz in 1999 he hoped to return with information on sustainable agriculture, but the stories he shared moved community members who wanted to see him return with more.
Kasozi lived his whole life in Kasese and founded the Center for Environmental Technology and Rural Development (CETRUD) prior to being chosen for an internship at the UCSC Center for Agro-Ecology. CETRUD works to mitigate health and poverty issues through its nine different programs, which range from developing sustainable agriculture, to child sponsorship programs.
A group of friends Kasozi made during his first trip to Santa Cruz helped him connect with nonprofit organizations like the Firelight Foundation and the Santa Cruz Sunrise Rotary Club, inspiring him to take steps to make Kasese a Sister City.
“The idea of a Sister City is that you have an ongoing relationship that’s built up a lot of exchanges between the communities,” said Deb Abbott, director of the Cantú Queer Center at UCSC. “One of my desires is to bring it to the next level so it’s not just a group of close friends that when there is a flood we’re all sending him personal money. He needs a higher level of response.”
Abbott is also a member of Friends of CETRUD, a core group of six Santa Cruzans looking to help raise funding for Kasozi and make Kasese a Sister City.
During May 2013, a flood devastated Kasese, displacing over 25,000 people and destroying Kasozi’s Center. Fundraisers in Santa Cruz and help from the local government in Kasese has helped CETRUD get back on its feet, but Kasozi and community members are still working to rebuild the Center.
“We have more than fifty people giving us a hand for rebuilding the Center, we did fundraise in Santa Cruz during my stay last year and some good friends of CETRUD have continued supporting us,” Kasozi said.
In 2011, the Sister City Committee in Santa Cruz approved Kasese as a Friendship City, the first step toward becoming a Sister City. In June of last year, a delegation from Kasese, including the Mayor, Kasozi and three other leaders, visited Santa Cruz as a step toward becoming a Sister City. They met with local leaders, participated in local events and held a fundraiser for the recent flood.
“I try to come to Santa Cruz every year depending on what I’m doing and if funds allow, I have fundraised for projects in Uganda,” Kasozi said. “People have been so good to me, that is why I call it my second home.”
A Santa Cruz delegation is currently being set up for February 2015 by Peggy Pollard, Chair of the Kasese subcommittee of the Sister Cities Committee, an advisory body to the Santa Cruz City Council.
Pollard said former Mayor Hilary Bryant and current Vice Mayor Don Lane are on the list of 12 potential delegates planning to pay out of pocket to visit Kasese in February. She hopes the delegates’ experiences will give Santa Cruz the push it needs to upgrade Kasese from a Friendship City to a Sister City.
“Meeting in person is very powerful, there is a certain realness in seeing firsthand how much we can do to help,” Pollard said. “The memory of that can last a long time, even for many years and far away across the globe.”
The two cities will work to implement cooperative activities and exchanges in education, culture, technology, business and humanitarian fields.
Earlier this year, Uganda passed an anti-homosexuality law that further criminalizes same-sex relations with penalties including life in prison and execution. Pollard expressed that passing this law drove the Sister City Committee to be concerned about a future Sister City relationship. A potential delegate even dropped out because of the law.
“This kind of issue is exactly why we should become a Sister City with Kasese — the best way we can help protect the human rights of [people who identify as lesbian or gay] in Uganda is to have an ongoing relationship with the Kasese leaders so we can talk with them about it and they hear other voices rather than just the fearmongers,” Pollard said.
Pollard hopes the Santa Cruz delegation will solidify Kasese’s path toward becoming a Sister City.
“Santa Cruz should get more involved so we can exchange our programs, having Santa Cruz as a sister will help into developing Kasese,” said Kasozi. “The benefits are based on business, tourism, education and cultural exchanges. Personally, the relationship I have with the people of Santa Cruz will live on forever." [end]

Assist International hosting "Sister Rosemary" movie
Assist International HQ in Scotts Valley has done many humanitarian aid trips to Uganda and wants to advise and encourage us in our Sister City relationship. Director Bob Pagett wants to show us the new documentary movie at their office, and tell us more about AI's great international work.http://www.assistinternational.org/
We have not set a date/time yet, to see this documentary of a catholic nun, named by Time magazine as one of 100 most influential people in the world this year. She runs a girls school rehabilitating formerly abducted girl child soldiers from Joseph Kony's army. The movie is not very graphic, (phew) putting in cartoon format the shocking parts. It  does interview some of the real girls as well as telling Sister Rosemary's story growing up in Uganda. Valuable background on Ugandan culture and historical context.

Anti-Homosexuality Law Repealed!
Thanks to several friends who sent news links... law repealed by Ugandan Supreme Court due to the congress not having a legal quorum to pass it. In any case, some of us believe the best way of helping the homosexual community in Uganda  is to develop Sister City relations with them to be able to discuss peacefully and learn from each other, which we already have already been doing.


FRIENDS & SUPPORTERS IN THE NEWS!
Congratulations to UCSC Professor Daniel Press, Director of CASFS the Center for AgroEcology and Sustainable Food Systems [the catalyst of this Sister City relationship] who was included in UC Systemwide news of UC President Janet Napolitano's initiative to alleviate world hunger by  Sustainable Food Systems,. "Building on already strong UC research ... the effort will work "toward putting the world on a path to sustainably and nutritiously feed itself," according to the UC announcement July 1

Congratulations to Alex Felix Majeme (Kasese former city manager) his sister Margaret Mutonyi has just been appointed a Federal Judge serving the same city of Gulu as Sister Rosemary referred to as Hon Lady Justice, she is also a pastor in a local church in kampala.
Kasese Delegations Supporters
Thanks to all these below who are  supporting our Kasese-Santa Cruz relationship and delegation(s)